@HOODIllustrated 101 Most Interesting Moments of This Decade No.101-66 Pt.1 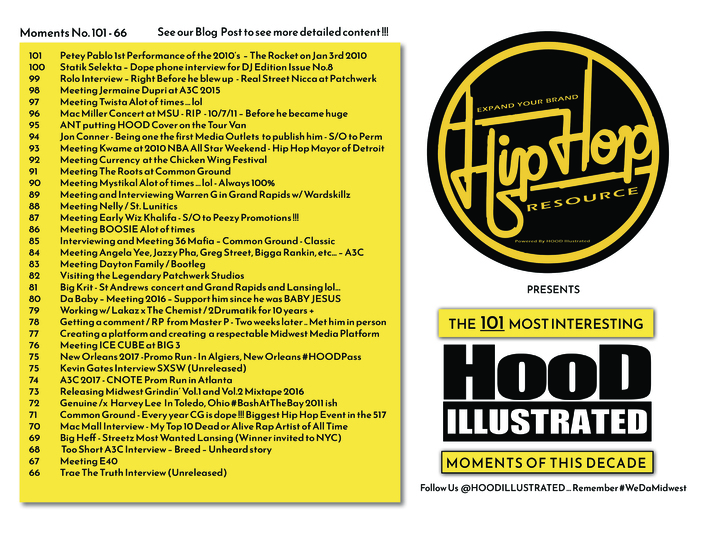 HOOD Illustrated Magazine wanted to highlight some of our most interesting moments of the 2010's.  For those who may not know; in 2010 it was a turning point for HOOD Illustrated and ushered a new focus on brand expansion with a demographic focus on being the primary resource for hip hop content / coverage in the Midwest Region.

This was the year that we converted to a bigger version of the publication. Previously we printed and distributed (5.5x8.5) mini mags up until Issue No.5 was printed w/ C-Bo #WestCoastLegend and Slime Money Ent. graced our cover.  This was a turning point for the company as we extended our reach on the West Coast following our issue No.4 with Freeway Ricky Ross fresh out of Prison (actually we had the very 1st interview prior to his 20 year bid in Federal Prison) We completed that issue a few weeks after they released him from the halfway house after being wrongfully convicted !!! From that point you'll see through our timeline that Freeway Rick has always and still has supported HOOD Illustrated Magazine.

This is just a backdrop to the initial expectations and set the landscape for an amazing decade of showcasing indie artist right next to the superstars of rap and entertainment.  We are still independent and black owned; following the blueprint of the individuals who created the blueprint of the independent hustle. I want to shout out everybody who has supported HOOD Illustrated since the very beginning and have watched us grow into  an unique platform that has created a space that is respected within the industry.

Follow me as I take you down memory lane and touch on a few memorable moments from 2010 and beyond.  This was a hard task to narrow it down to 101 moments in time.  All these moments / events have documentation and can be seen on our IG and / or Facebook page.

* 95  - A.N.T outta Grand Rapids had one of the Biggest Indie Artist runs in the Midwest. He Graced the cover of Issue No.7 along w/ MGK and put that cover on his tour bus... Biggest promo spot to date for HOOD Illustrated.. Might wanna move this up to around 50

* 94  - Jon Connor was on his early grind in early 2010 and Big Perm was booking him all over the State of Michigan.  These were the early times before the connect with Dr. Dre and Aftermath.  HOOD Illustrated was one of the first to publish and go hard for the Flint Native w/ much respect the big bro Mateen Cleaves.

* 80 - Interviewing and Meeting a young SXSW Baby Jesus aka DaBaby at in 2016.  He was def on the grind w/ hella promo. I didn't know him then but recognized a true grinder and put him out there to the HOOD Illustrated Readers to check out.

* 77 - HOOD Illustrated Platform.  This idea came from 20 other ideas but its the one that stuck. I'm so proud of the name that has been created and respect we hold within the industry with the artist and execs.

* 69 - Connecting w/ Big Heff one of the most influential people in our region. Met in 2010 and have created a great connection providing unique opportunities for artists the benefit from. Big Heff tour has been hosted by me 3 times.

* 68 - Too short interview question at A3C speaking on MC Breed and his impact.. Classic content.  Will be released in the upcoming issue.

@YFMCIZZLE FROM A SMALL CITY CALLED ARLINGTON ,GA BEEN DOING SINCE 13 TOOK EVERYTHING I WAS GOING…See More
Feb 13
0 Comments 0 Promotions