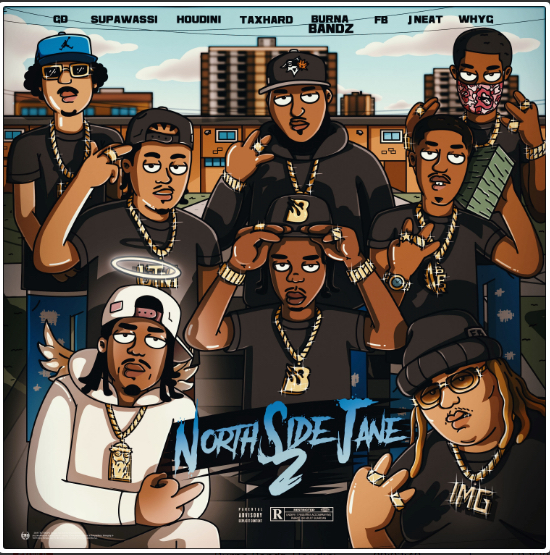 In 2018, Toronto based start up Indie label Up Top Movement got together all the youth and upcoming artists from the Northside Jane area of the city and put together an underground classic. The "Northside Jane" album would go on to generate over 20 million streams across platforms and introduce the world to artists like Houdini, Burna Bandz, Pressa, Why G, Supawassi and J Neat.

Following up the massively successful first project, Up Top Movement presents "Northside Jane 2". Featuring brand new, exclusive records with Burna Bandz, Houdini, Supawassi, Why G, J Neat and more, this album is sure to shake up the city and have fans talking. The first singles "Chase" by J Neat, Why G and Supawassi and “Sick Of Cells” by Burna Bandz & Houdini are currently featured on some of your favorite playlists on; Spotify, Apple Music, Amazon Prime Music, YouTube Music and more.

The 16 track project is a testament to the deep bonds the Jane and Finch community builds. The neighborhood is home to some of the cities most successful indie acts and the talent is evident in the music. The community has also experienced a lot of violence and losses over the years and unfortunately several young careers have been cut short. In May 2020, Toronto hip hop artist Houdini was gunned down in Down Town Toronto, which made international headlines, as he was one of the cities most promising and popular artists who had a very bright future in the industry. In June, during a memorial for Houdini, the wake was attacked by a drive by shooting in which several people attending returned fire. Among those arrested for returning gunfire in defense of those attending at the memorial was Up Top Movement Inc. affiliated artists Burna Bandz and GD. Burna Bandz latest album “Bandz Can’t Fold” has been streamed over 1 Million times on Spotify alone since it’s release in the May and he also continues to be one of the cities most promising indie voices. The label will keep fans updated on any developments as we pray for the best outcomes for everyone involved.

For now, please enjoy these new records from the heart of Northside Jane and the artists that represent it world wide!

That kid J the Don ft Chris Rivers-See Us

Ras Fiery's Music Brings People Together and Captures the Hearts of Fans All Over the WorldToronto,…See More
Wednesday
0 Comments 0 Promotions

Mark Selvie creates an timeless record!!Show love to many of our Down South Legends in the game,…See More
Wednesday
0 Comments 0 Promotions

DESO300 - Facetime With You