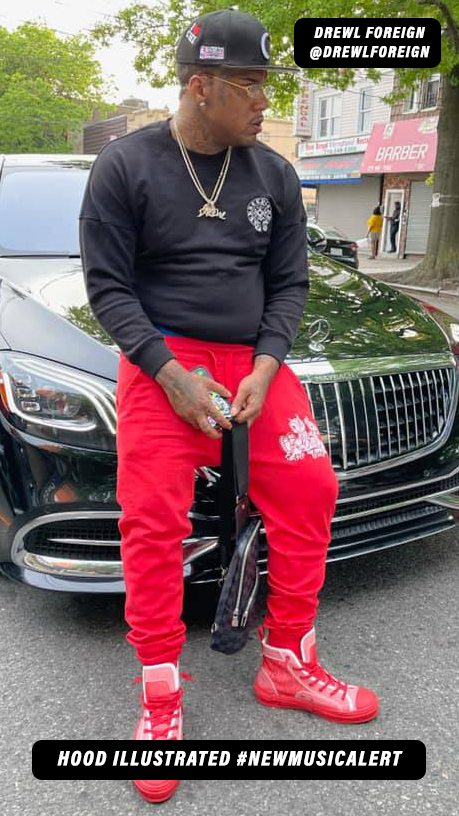 This weeks #NewMusicAlert comes from Drewl Foreign reppin' Brooklyn, NY ... Next artist on the rise.  Check out the write up and his most recent videos below.

When the streets are talking it's best to pay attention !!! You already know it's on the floor when HOT97 plays your song the day it was released (That's Major)  !!!!  It's a lot to talk about when a new artist receives 100k views in the first week the video drops; he's representing Brooklyn, Ny and goes by the name of Drewl Foreign.  With the summer approaching and New projects being released weekly it's important to be active and put the music out there for the world to see.  Currently Drewl Foreign has blessed us w/ several visuals so far with a project scheduled to drop soon.  We have included two fire visuals #WatchOut and #URUS in this blog .... Read up on Drewl Foreign and follow him on IG #Support #CertifiedHOODMusic

Born in 1995, Drewl always wanted to be musician and started writing music in his schooldays. This is quite extraordinary for an artist to show this much talent at such young age. Drewl cites Meek mill, Lil durk and Fabulous as inspiration behind his decision to fully dedicate his career toward making hip hop music. Initially Drewl used play music around Brooklyn, New york where he grew up. Soon his talent caught the eyes of many professional rappers from east coast and from that moment is musical journey as a professional hip hop artist begun. According to music critics Drewl’s music is fresh and innovative and he has an iconic voice which would soon be loved by entire country. Officially Drewl foreign describes himself as a Brooklyn drill rapper which is a new musical movement which has taken over entire hip hop scene.

Drewl has always admired rap music as the rap songs always have a meaning. Rap songs are about life experiences, struggles, sadness and happiness. So far Drewl foreign has dropped 12 singles featuring leading artists such as Fivio foreign, OMB Jaydee, Beno 8fs, TDF,  Fabdon Porter B and Nay the dancer Op. Right now Drewl is working on some new songs which will be soon revealed. It is expected that Drewl is being approached by a major record label and there will be a major announcement very soon. According to Drewl, constant support from his brother Rah lito (@official_rahlito) and his team “ForeverForeignEnt” has been elemental in his success. It is without a doubt that Drewl Foreign is going to be one of the most influential rappers of the modern era and his contribution to the Brooklyn drill music scene will be invaluable. You can learn more about Drewl Foreign by following him on his social media account; IG: @drewlforeign.

Shot By Moshine The Don

Contact @HOODIllustrated for project promotion, marketing and consulting.  Promo packages are available to fit any budget.  Email content to hoodillmusic@gmail.com