@HOODIllustrated 101 Most Interesting Moments of This Decade No.65-30 Pt.2 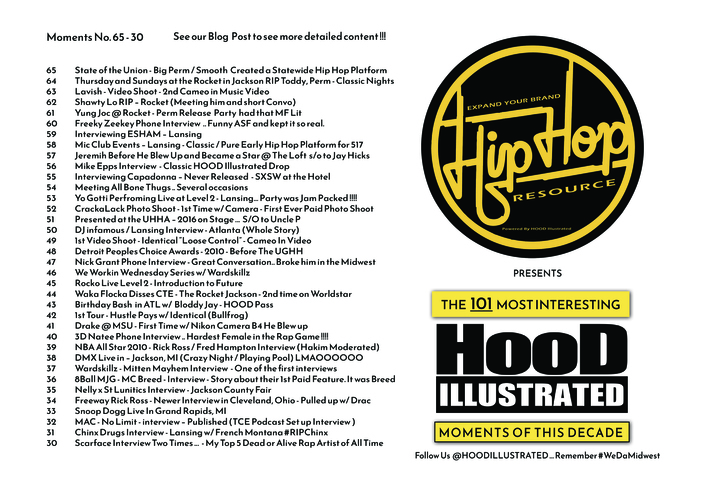 Through this journey I've been  blessed to connect with a lot of artist at the beginning of their career and assist in growing their brand; although some may be mega superstars at a certain point in time HOOD Illustrated Magazine was a resource that helped them and their willingness to sit down and chop it up and have conversations with me was some the illest stuff i could have ever imagined.

I got to shout out my hometown of Lansing, Michigan for supporting this movement.  Without your hometown support I don't see how one can really grow and take on bigger goals.  Segment 2 incorporates a lot of that hometown support and created the platforms that allowed HOOD Illustrated to grow and get better at what we do and how we operate when its time to hit different states and represent the Midwest.

The entire decade wasn't all work, work, work ... but from 2012 through 2015 we found a niche' and focused more on our target market while reaching out to the artist who represented the Midwest to the fullest and this allowed us to release two issues back to back that were purchased online from all over the world.  We had Tech N9ne in Issue No.6  and MGK featured on Issue No.7; while breaking some major artist in the Midwest such as Kendrick Lamar right before he signed w/ Dr. Dre... We were the first to interview and publish stories in the Midwest on Nipsey Hussle back in 2010 through our initial releationship w/ Jay Rock and TDE back when he was their flagship artist.  We also connected w/ MGK in early 2010 at the Ohio Hip Hop Awards and a few years later right before he signed w/ Bad Boy had him on the cover... Growing their independent brands at the early stages in their careers.

* 55 - Capadonna was an interview i lucked up on in Austin, TX at SXSW. I was headed to my hotel room and had my camera in hand. Outside i noticed a NY Yankees cap and a big ass gold chain and approached to see what was up and sparked a conversation that ended up into a photoshoot and classic interview (unreleased).

*50  - DJ Infamous  was interviewed and featured story shot by Facecard Photograpy in ATL for our Issue No.8 DJ Edition. Inf is a Lansing native and we got a classic interview and story on his rise to being The Youngest in Charge as it pertains to DJ's in ATL in the early 2010's.

* 49  - Identical - 1st Video Cameo  i was asked to do a cameo in a video "Loose Control" from my Inkster family Identical. This was my first video. It was professionally done and showed me that it is real levels to this music business. This had to be around 2011.

* 46 - We Workin' Wednesday w/ Wardskillz me and my guy Ward thought of fresh way to engage with indie artist in the Midwest. We created an unique outlet for artist to showcase their music to taste makers and fans in a safe environment in 2016 and spread through 2017.  This became one of the hottest music showcases in the Midwest bringing artist from all over to perform.

* 44 - Waka Flocka Dissed Jeezy  in the middle of their feud; CTE and Gucci Mane had some exchanges. It ended up spilling into an altercation w/ Slick Pulla and Waka the night before in Indiana. The next day in Jackson Waka and #RIPSlimDunkin dissed CTE and my footage was uploaded to worldstar and ended up getting close to 500k views back in 2011 #RealViews

* 41 - Drake concert at MSU  was epic. This was Spring 2010 on MSU Campus. The reason this is on my list because it became a turning point in how I moved and went about my business. So the story goes... I get a call to cover the event. This is right on the verge of Drake blowing up and my camera was down. I called my camera guy and he wasn't willing to help and kinda had me in a now win situation. So an hour before the event me and my wife head to Best Buy, get a camera put on the credit card. I had 15 minutes to learn this camera, get to the event and shoot. From that point on I started becoming more independent and ultimately was a blessing.

* 38 - DMX Live in Jackson  this was a crazy crazy night. DMX performed and by the end of the night around 3am when club is shut down; He was playing pool, praying and breaking up fights... lol - Never forget that night.

* 30 - Scarface Interviewed twice. 1st interview was trash !!! He wasn't feeling it and Bunique could tell that he was on some bs... But the next interview done in Lansing was classic. Got a signed CD, Magazine and a dope interview. Still my Top 5 Dead or Alive.