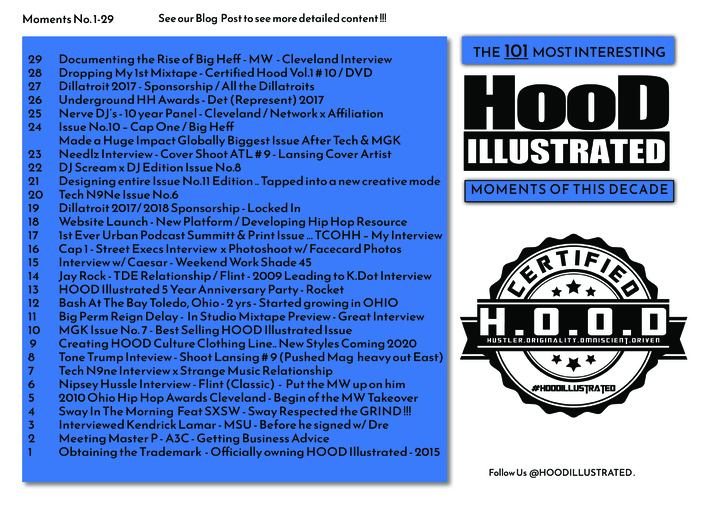 We are finally to the Top 29 Hood Illustrated Hip Hop moments of this decade. A lot of these moments are my personal achievements; well to keep it 1hunid all of these are proud moments and situations in time that assisted in growing the brand and pushing me as an CEO to reach out and get out of the small space we often are confined in.

This is to a great 2010's and a dope spring board for the next chapter for HOOD Illustrated Global Media / HOOD Illustrated Magazine / Hip Hop Resource / Certified HOOD Music Group & HOOD Culture Clothing. We are branded up with no plans on slowing down. Special shout out to my Family (Wife, Kids,Big Cal, Phill, Reggie, Ward ) Big ups to B-Unique Designz; appreciate all you do.. Chopz x Facecard Photos my link in ATL, Angel (Sam Hoody) Big Twan, Hakim, Mr. Joe Walker, Drac, Tates Take, Roc in Pontiac and everybody else who push me to grind hard and believe in this HOOD Illustrated thing !!!!

Check out some of the highlights I brought to light below.

* 29 - Big Heff rise in the MW  this guy is one of the reasons HOOD Illustrated jumped off in late 2010. With his friendship and belief in a young cat from Michigan who was hungry enough to drive to Cleveland and interview a local rapper called Machine Gun Kelly since that point Heff has be real and we've done some big things in the Midwest outside of the work he put in !!! Proud to be apart of that early grind.

* 21  - Designing Issue No.11 later in the decade I became burned out and lost a lot focus. I eventually got back in a creative space and took it back to day one. Taught myself how to create an Issue that flowed great and incorporate some changes I didn't have the time to focus on in the past. Just starting at square 1. No better time than now.

* 16  - Cap One Interview x Photoshoot A3C 2015  had to put on for the Midwest. One of my dopest interview and photo shoot to date.. s/o to Facecard Photos.

* 10 - MGK Best selling issue Didn't realize the impact MGK had and how big his fan base was until issue No. 7 dropped. One of my best issues w/ thousands of sold magazines and hundred sold out of the country.

* 4 - Sway In the Morning - SXSW interview live  got to spread the word about my brand on one of the biggest platforms in the world. Met sway for the 1st time and created a situation where he knows about the HOOD Illustrated brand and have a connection for future business. Being a tastemaker and journalist. To be in the same space with this legend and earn that respect ranked in my top 5 moments of all time.

* 3 - Interviewing Kendrick Lamar  great interview and performance at MSU. Connected through my relationship w/ Jay Rock at the Time. This was a the point when he was in talks w/ Dr. Dre and Aftermath.

*1 - Obtaining the HOOD Illustrated Trademark  one of my best moments because the name was taken when i initially attempted to get it trademarked. Tried two more times and failed loosing out on about $1200 but eventually did some more research and processed the request myself and eventually getting it cleared in June 2015. Owning the word HOOD