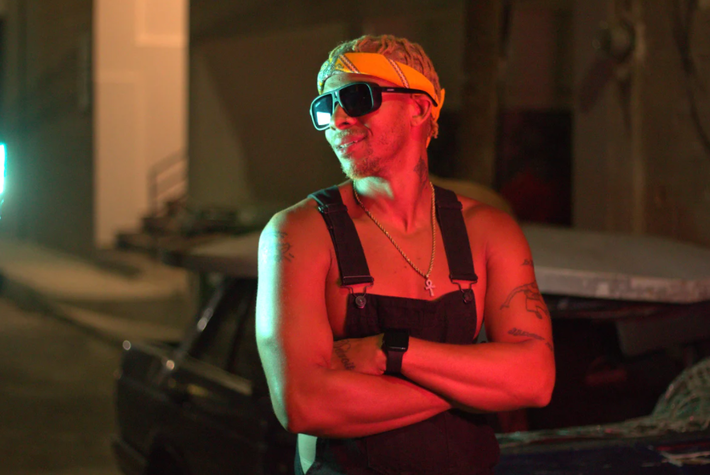 “Lucha Libre” is a hip-hop album by artist $urferr Gold it was released on Streaming platforms worldwide on June 8th 2021. Throughout the 13 tracks, I was mesmerized by $urferr Goldʼs ability to craft an atmosphere in his songs and transport listeners to new places through symbolism and emotive delivery. Lucha Libre felt like & fully realized project with influences from trap and R&B.

The first half of the album is dominated by energetic songs that help solidify $urferr Goldʼs sound and defining aesthetics. Soul in the Dark has a spacey and trap-heavy vibe. Due to his strong presence in the song, he can paint a dark picture of his mindset and the place heʼs coming from. Tears immediately capitalizes on this ambiance with its Travis Scott influence. I felt Goldʼs delivery was full of emotion and feeling. His verse in the latter half added more substance to the song and left a lasting impression. Rule the World has strong Kid Cudi vibes with a darker and fantastical aesthetic to it. My only gripe is that the track ends too early. White Hoodie is & moody track that uses & slower tempo to elevate its sound and depth.

Devotion immediately starts with heavy-hitting 808s. I was instantly caught by the laidback and xany vibe of the track. Lyd Vicious’s chemistry with Gold made the track special and an excellent way to end the logical first half of the album. I felt the following tracks had their own tone: War carried a serious tone with it and an equally aggressive message. Brain Washed focuses on the distorted inner monologue of $urferr Gold. He goes back and forth with himself, and it feels like he has reached out for a previously unexplored inner dimension.

$urferr Gold is not afraid of giving everything to the rap game and his career as an artist. War was my favorite song by far in this album. Promises was the next highlight for me with its distant production and more established sound. $urferrr Gold felt natural and comfortable on this instrumental. Don carried a distinct Juicewrld and Lil Uzi Vert influence. Gold was experimenting a little bit into the emo territory with this song and it paid off immensely. The subject matter dove deep into his mindset and was abundant with introspection. The album ends on a moody note with She Donʼt Even Know.

Overall, I felt that the specialized trap/trance-y production and $urferr Goldʼs prolific performance set the uniqueness of this albumʼs sound. No song felt out of place, and they all worked well together towards the dark and psychedelic aesthetic that Gold was aiming to craft. I highly recommend listening to this album!

Po Politickin is a hip hop podcaster who has interviewed a long line of hip hop greats such as J.Prince Senior, J Hood, Freddie Gibbs, Rasheeda, and now $urferr Gold. The Po Politickin show has been live on air from 2008 until now and it is a trusted source of information in the rap world. In The Interview with Po, $urferr Gold talks his most recent Album Lucha Libre, his music origins, the state of his life and career, as well as his plans for future artistic projects. $urferr Gold goes in depth and leaves no stone uncovered. The interview is a must watch for any true rap/hip hop fan! Watch The Interview below on YouTube or Listen to the interview on player.fm, Spreaker, or Spotify!

IF YOU HAVEN'T ALREADY DONE SO, MAKE SURE TO VISIT THE OFFICIAL $URFERR GOLD WEBSITE WHICH CAN BE FOUND BELOW. THERE YOU CAN BE THE FIRST TO KNOWS WHEN HE RELEASES THE LATEST $URFERR GOLD MUSIC AND CONTENT.