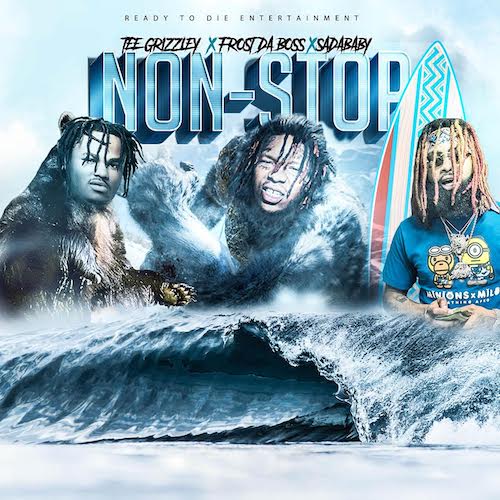 Today RTD Frost releases the audio to his new single, "Non Stop" featuring Tee Grizzley and Sada Baby.
Repping North Coumbus's Joyce Avenue, this self made entrepreneur was recently released from a five year prison bid and hit the ground running.
"See to be certified you have to be able to walk out of any door in life. That’s what makes a man more dangerous in life, being able to walk out of any door. Meaning, I can talk music with you right now, I can talk politics, and I can tell you some street shit," RTD Frost explained. "Knowledge is power. I really come from the streets, it’s a lot of people in the rap game that say they come from the streets but they’re really not. I’m here to separate the real from the fake.

R.T.D stands for Ready to Die, and while that may sound raw, RTD Frost says that it really means "FEARLESS."
"I used to go to the club and throw money. I would get all the attention like a rapper, and I already had the persona of a rapper. When my homie came home, he said I might as well be a rapper, so I started rapping the next day. This was about a year ago," RTD Frost explained.
Since a young boy this now, 24-year-old rapper has always been brutally honest and fearless which has helped him land collaborations with some of today’s hottest rappers, Sada Baby, OMB Peezy, Tee Grizzly, DJ Holiday and many more.
Those collaboration have meant more than music as RTD Frost has developed real relationships with his collaborators.
"I grew up listening to Gucci, and I feel like our stories are the same, from going to jail and coming out doing better than we were before. I’ve always felt like I could relate to him on a different level," he said. "I''d def influenced by Sada Baby and OMB Peezy too - since I’ve met them, they’ve shown me nothing but genuine Love. They give me advice and always call just to check on me. Sada told me to put my energy in my music and OMB Peezy told me to tell my story, don’t sugar coat shit and give them all your pain,"
Going forward RTD Frost is gearing up for his DJ Holiday hosted mixtape called Certified. On the mixtape where he switches up this flows to show his versatility on this project, highlighted by the song "Non Stop" featuring Sada Baby, Tee Grizzly and produced by DJ Phatty Banks and Kid Star.
While a music video for this song is still in the works with Sada Baby and Tee Grizzley being on tour, RTD plans to shoot a visual in the coming months.
"I love my fans the most. I’m going to always please ya’ll. I’ll have to where you’ll never know what I’m going to do next with my music or my videos. I’ll always stay consistent and NEVER let up," RTD Frost said.