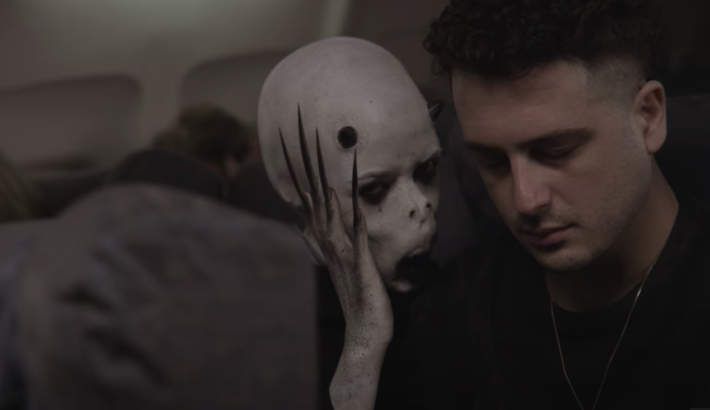 The cryptic visual pictures Kavan on a flight gone wrong in a somewhat dystopian and hellish visual that not only shows Kavan's creativity as an artist, but also his immense capabilities as both a visual director and editor.

"Essentially the main reason I always wanted to do a plane crash is because I don't really have any fears in life besides that. That's the one way I don't want to leave this earth. So I was thinking, why not put it in the video? I wanted to show that element of it and I love the idea of seeing the terror in people's faces," Kavan joked. "Cause you don't know how people would respond in that situation. When the demon arrives, the premise behind it is that she's essentially the person who's taking me to hell. And she'll also have a recurring role throughout like multiple videos."

Using CGI and other visual mesmerizing effects Kavan new "Alright" visual sets him apart from the typical rap videos you see on a day to day basis.

"This project is going to be a seven track EP when it's done. And every video ties into the last one, it's just going to be one long movie if you watched it straight through," Kavan explained. "So each video is a direct sequel to the one before. Now that doesn't necessarily mean the lyrics will always be like that. The first three songs all tie in before they become more individually focused, more just stand alone songs, but the narrative is still constructed through the visuals."

When asked if this hellish and cryptic visual is something that lauds or promotes devil worship, Kavan explained that the visual is more about how darkness is prevalent in life. He believes in positive motives and ideals and does not promote evil in any way, but also doesn't want to shy away from the fact evil is so prevalent in our world. In the project he explains the visuals will cover both positive and terrifying moments.

"If anything it'd be the other way around. I don't support that. I don't mind playing into the imagery because of the aspect of, if something that has always felt so prevalent in my life. I always feel like darkness is right next to me or something, right next to me, but it doesn't mean I want to be that or anything, if anything, I resent it, but like I can't get rid of it," Kavan explained.