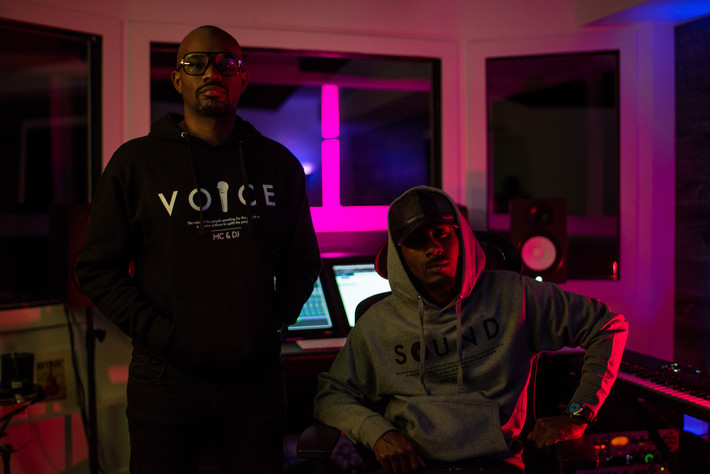 The MC and the DJ are two of the pillars of hip-hop music and culture. A culture that has endured for  more than 40 years and remains one of the greatest selling musical genres of all-time and the last true  American- made art form.

For Quentin Holmes, his love for the culture was sparked by the words of Public Enemy, he was moved  to his core. “Those voices that could speak truth to power,” he says of the legendary rap group. “The  power to just engage and spark enjoyment, or even promote healing. I knew very early on that hip-hop  would take over the world.”

A Michigan native turned California transplant, Holmes also names Tupac Shakur as one of his  inspirations. The late rapper/actor combined something that remains a driving force of hip-hop: The  ability to make dynamic poetry, but also rock a party.

That duality is what makes MC & DJ so unique. It celebrates the power of every wearer to find their  own voice.

“I can live the best life I can, and speak up for what I want, or what I want to see in this world,” Holmes  vows. “That is what I want this collection to do. To inspire the voices and celebrate the sound.”

Quentin Holmes likes to describe himself as a “Mission-  Minded Creator” Born into a hard-working middle-class  family that had a deep value for education, Holmes  enrolled in the illustrious University of Michigan where he  earned a bachelor’s degree in Mass Communications.

A talented writer, Holmes developed a line of children’s  books called the Real Street Kidz Multicultural Book Series.  He brought his desire to see himself mirrored in youth  literature. The books have sold hundreds of copies with  teamwork as the central theme calling on preteen readers  to embrace indispensable lessons.

Holmes also created a series for younger readers with  multicultural characters who inspire, embolden, and  entertain a brand-new generation of children.

But his first business was inspired by his own impeccable  fashion. At Wear Apparel was founded in 2003. The  streetwear brand immediately took off gaining national  acclaim and was featured in several national media outlets  including, Slam Magazine, Dime Magazine, Long Beach  Press-Telegram, BlackVibes.com, and the feature film, The  Reunion.

“I am a person who draws upon my life experiences to  create dope brands that have a purposeful mission.”

His love for hip-hop music and culture recently inspired  Holmes to launch MC x DJ—a new apparel line of tees that  celebrates his nostalgic love of the legendary music genre.

“Hip-Hop music is just so powerful. It is the voice of a  generation that can promote engagement, enjoyment, and  even healing. I’m excited about this new line as a way that  fans can wear their love across their chests.”

With MC x DJ, Holmes believes that this unique clothing  line will have a long-lasting impact.