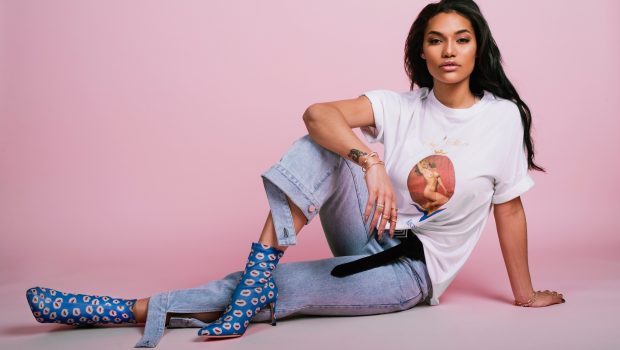 What do you get when you combine pop, R&B, and Caribbean music with a melodic voice? The artist professionally known as CYM, born Cymber Nicole Larkin, who is taking the world by storm with her refreshing and unique musical style. She has grown from an internationally renowned teen star to a respected solo artist with a refined sound all her own.
Originally from Orlando Florida, home to some of the most talented and popular musical artists in the world, CYM is the daughter of hall-of-fame baseball player Barry Larkin, and musical theater performer and dancer Lisa Larkin. She developed her talents as a singer, songwriter, dancer, model and athlete from an early age, landing coveted collaborations with brands such as Puma, Nike and Foot Locker. CYM began her musical career in Brazil, when in 2012 her single “Bring on the Night”, produced by Mister Jam, rose to the top of the iTunes charts. The success of this single led to touring opportunities all over South America for several years.

CYM’s rise on the U.S. music scene began in the fall of 2015 when she moved to New York City and began collaborating with acclaimed producer K Mack (Beyoncé, Diddy, Missy Elliott, etc.). Her debut single “Bombs Away”, produced by Yobo, was released in summer 2016 and received radio station buzz from coast to coast. The single was accompanied by a theatrical, edgy and bold music video that was streamed by thousands of fans on YouTube and Soundcloud. Hot off the buzz from this track, CYM starred as an opening act for Marc E Bassy’s “Groovy People Tour”, alongside Elhae.
Soon after “Bombs Away,” CYM’s debut EP Shadows was released, with heartfelt songs about being a strong young woman breaking into the music industry and creating her own legacy. While in the studio, CYM collaborated with leading producers and songwriters under 1801 Records to create a record reflecting her unique sound and varied tastes from pop, to R&B, to Latin and Caribbean sounds.

The hypnotic beat and synth melody of “Gun Play” featuring Rich Home Quan and “Fix It” went on to achieve hit status. CYM has received a number of accolades, including being named a Revolt Spotlight Artist, participating in the Revolt Music Conference and Beats 1 Interview held in Miami in 2016, AC3 Fest 2016, SXSW Fest 2017, and headlining SOB’s BxC Entertainment Music Fest 2017.

In 2018, CYM teamed up with Grammy award-winning producers Ayo N Keyz (Cardi B, Chris Brown, Jaden Smith, etc) to show fans her versatility as an artist with a new musical direction. Her previous record Shadows ultimately didn’t reflect all the aspects of her personality, and her forthcoming record will show off her full artistic range, while revealing her emotional vulnerability. CYM’s latest single “Karma” is a high- spirited R&B track inspired by the frustrations of a one-sided relationship. The second full length EP, “Love CYM” will be released in December 2019 and promises to take listeners on an emotional journey through navigating relationships and gaining strength through life’s trials.

Sir Dolla really has used this pandemic in an upbeat and thoughtful twist.  This song is talking…See More
17 hours ago
0 Comments 0 Promotions